How Does Acupuncture Work?

If you never heard of Acupuncture, the first question you would ask is “How does Acupuncture work?”. According to classical doctrines of Chinese Medicine, there is an unceasing flow of “life energy” called Qi and pronounced “Chee” throughout all living things.  In humans, Qi originates in internal organs and circulates through channels called meridians, eventually returning to pool in the organs.  When the flow of Qi is regular, balanced and smooth one is healthy.  If the flow is blocked, diverted, or the balance disturbed so that Qi becomes depleted or excessive, disease develops. 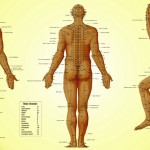 There are hundreds of points along the meridians, acupuncture points, where the energy flow can be restored, stimulated, regulated, or balanced.  By placing thin needles in carefully selected points, Qi can be normalized and health is restored.  The acupuncturist may stimulate the needle with very small movement to stimulate the Qi.

In some cases, tiny electrical currents are applied to the needles to stimulate Qi flow.  This is electro-acupuncture.

In other cases, an herb, called Moxa, is placed on the needle or over the point and burned.  Moxabustion warms the point and strengthens Qi flow.

Sometimes, just finger pressure is placed on points or along entire meridians to apply “Acupressure”.